Very few world leaders receive Israel’s grand reception; people like the President of the United States, and The Pope. So it did not go unnoticed that India’s Prime Minister Narendra Modi received the same red elite treatment. While he became the first Indian Prime Minister ever to visit Israel, we shall try to know more about Israel, a middle eastern country.

Israel, officially the State of Israel, is a country in the Middle East, on the southeastern shore of the Mediterranean Sea and the northern shore of the Red Sea. Israel shares land border with Lebanon to the north, Syria to the northeast, Jordan on the east, the Palestinian territories of the West Bank and Gaza Strip to the east and west, respectively, and Egypt to the southwest. The country contains geographically diverse features within its relatively small area. Israel’s economy and technology center is Tel Aviv, while its seat of government and proclaimed capital is Jerusalem. The population of Israel, as defined by the Israel Central Bureau of Statistics, was estimated in 2017 to be 8,711,460 people.

It is the world’s only Jewish-majority state, with 74.8% being designated as Jewish.

The country’s second largest group of citizens are Arabs, at 20.8% (including the Druze and most East Jerusalem Arabs).

The country has the highest standard of living in the Middle East, and has one of the highest life expectancies in the world. Israel is a developed country and an OECD member, with the 34th largest economy in the world by nominal gross domestic product as of 2016.

India – Israel Relations
The two countries enjoy an extensive economic, military, and strategic relationship. India is the largest buyer of Israeli military equipment and Israel is the second-largest defence supplier to India after Russia.

From 1999 to 2009, the military business between the two nations was worth around $9 billions.

Relations further expanded during Prime Minister Narendra Modi’s administration, with India abstaining from voting against Israel in the United Nations in several resolutions. As of 2015, the two nations are negotiating an extensive bilateral free trade agreement, focusing on areas such as information technology, biotechnology, and agriculture. Ezer Weizman became the first Israeli President to visit India in 1997 followed by Jaswant Singh‘s visit in 2000 as The Minister of External Affairs. In 2003, Ariel Sharon was the first Israeli Prime Minister to visit India. Sharon’s visit was condemned in leftist and Muslim circles. Hundreds of supporters of India’s various pro-Islamic and communist parties rallied in New Delhi. Nearly 100 Muslims were arrested. Students of Aligarh Muslim University demanded that India severe ties with Israel and increase ties with Palestine. 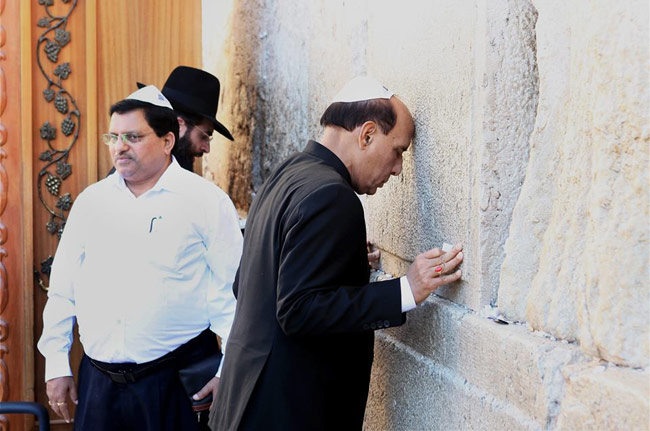 Breaking from convention, Singh was the first Indian minister to visit Israel without also visiting Palestine on the same trip.

In December 2014 a news published in The Hindu  that India may end support to Palestine. Also Read | Procedure Of Election Of President, In India.

In February 2015 Israeli Defence Minister Moshe Ya’alon came to India. During his visit he participated in Aero India 2015. He also met his Indian counterpart, as well as the Indian PM.

Pranab Mukherjee became the first Indian President to visit Israel from October 13 to 15, 2015. Mukherjee was given the rare honour of addressing the Knesset. The Minister of External Affairs, Sushma Swaraj, visited Israel in January 2016. During the visit, she visited the Yad Vashem Holocaust Memorial in Jerusalem, and met with Prime Minister Benjamin Netanyahu, President Reuven Rivlin, members of the cabinet, and the Indian Jewish communities in Israel.

In September 2016, Minister of Agriculture (India), Radha Mohan Singh visited Israel to bolster India-Israel agricultural ties. He met his Israeli counterpart Uri Ariel, where the discussion concerned about collaborative opportunities in agriculture between both the countries.

“They assure us that when the time will come they will never, never, ever let anyone [act against] the existence of Israel.“ Indian Prime Minister Narendra Modi visited Israel for three days from 4 July 2017, the first ever visit by an Indian Prime Minister to the country. He did not visit Palestine during the trip, breaking from convention. With the sole exception of Union Minister Rajnath Singh, previous trips by Indian ministers and President Mukherjee included visits to both Israel and Palestine.

The Indian media described the move as the “de-hyphenation” of India’s relations with the two states.

With This Article, We Tried To Know More About Israel, Drop Your Views In The Comments Section Below.

5 Books You Must Read Once In A Lifetime

Gurleen Kaur
Books are our best friend. They never complaint for anything nor do they demand anything. If you are a book junkie, then this post...

10 Things You Must Do Before Getting Into A Relationship

Suchandana Patoa
Things To Know Before A Relationship A relationship is perhaps the most important phase and a milestone in two individuals' life. So, here are the...

‘Love Makes You Fat’ A Poem By Nadeem Raj Will Make...

Vanita Agrawal
Valentine's day is over and so is love returning on your palate to make you fat again. But Nadeem Raj in his poem for Unerase...

Mounika
Life is not as complicated as we make it. Moving on from one stage to another makes it easy. One might want to move...

A Little Throwback On How Our Lives Used To Be When...

Sanjusha Durgam
We are alone when we step foot into this world. The second we are out, we aren't alone anymore. Though we aren't aware, there...

10 Unanswerable Questions We Challenge You To Answer. Literally.

Sanjusha Durgam
This isn't related to science. For that matter, nothing I mention here is anyway linked to any kind of science. Well, if my unanswerable...

8 Tricks To Control Your Anger Before It Starts Ruling Your...

Raveena Patil
Call it frustration/anger/temper, these are the most common ailments we suffer from and there is nothing wrong with it. After all, we need to...

Guest Author
By Aditi Mittal I go to the United Colours of Benetton. I quite like this shirt in yellow. But the one there on the hanger,...

Khwaish Gupta
"If India is a computer, Congress is its default programme", once said our very own national comic and not-so-wise Rahul Gandhi (and he might...

7 Questions We All Have Asked Ourselves At Least Once Whenever...

Neetisha Verma
You can never have a life as the happy pill. Everybody knows that already, I know. But when life gives you lemons, you are...